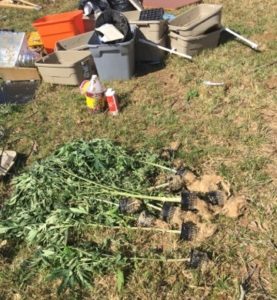 “They were taking pictures and trying to determine what class of tornado that it was and all that stuff,” Sheriff Byrd said.

It was in the wreckage of a mobile home on Brooksie Thompson Road where the sheriff said he noticed something that looked out of place.

“So while we’re over there, over in the edge of the woods, I found a pile of green, leafy material that looked like it didn’t belong where it was,” the sheriff said.

That green, leafy material turned out to be marijuana plants, and that’s not all they discovered.

“When I found those, then we got to looking through the rubble, and we found more plants,” Sheriff Byrd said. “And we found containers and piping and grow lights and things that were part of his hydroponic grow operation.”

The sheriff says they recovered about 28 pounds of marijuana from the property and are currently searching for the man who lived there. John Ernest Tidwell, faces charges for the manufacture of marijuana and the possession of drug paraphernalia. 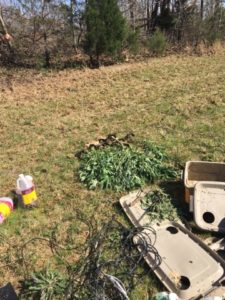 “I’m very sympathetic to him losing his home. I mean, I feel very badly that he did,” Sheriff Byrd said. “But I’m not the least bit sympathetic that he was in our county violating the law.”

The sheriff’s department says they received a call Thursday morning from an individual who said they were Tidwell’s attorney informing them that Tidwell plans to turn himself in soon.