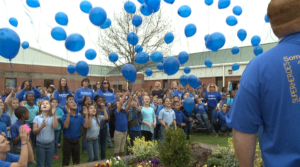 Even though Bentley Betts lost his fight with batten disease, it was clear he will not soon be forgotten by those who knew him.

“He’ll live on forever in my heart and I’m a better me because I knew BB,” said Kristy Prince, Bentley’s nurse.

Bentley Betts passed away from a rare neurological progressive disease that causes your brain to regress. In the end, Bentley was unable to walk or talk.

“One thing it did not take was his smile,” said Laura Betts, Bentley’s mom, “and even when he was sick last week, he still would smile.”

People who knew Bentley say even though he lost the battle, he won over the hearts of everyone he met.

“Those big brown eyes and the twinkle and the smile, just Bentley’s beautiful aura he carried you know,” said Prince, “it was just angelic.”

The Betts family said blue always looked good on their son Bentley, which is why you can find blue ribbons throughout Union City in remembrance of him.

“We’re just very thankful for the community that has rallied around us. We call them our army because you cant fight a battle without an army,” said Bentley’s mom.

“We all know where Bentley is,” she said, “and he’s not blind anymore, and he can walk, and he can talk, and I think that gives us a little bit of peace.”

Bentley’s funeral service is scheduled for Saturday in Union City.