WWI impact lives on one century later in Jackson

JACKSON, Tenn. — A century has passed since the beginning of the first World War, but it’s impact still lives on today in ways many wouldn’t realize. 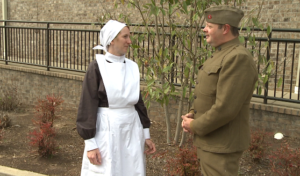 “World War I is the beginning of the modern age,” UT Martin history professor Dr. Alice Catherine Carls said. “It started everything.”

Commonly known as the “forgotten war,” Carls is just one historian in the area working to bring it’s daunting details to the surface.

She said even before the united states entry, West Tennesseans were getting involved.

Tim and his wife Inge Poole demonstrated what a dough boy and American Red Cross nurse would have worn during WWI.

As the manager of Pinson Mounds State Archaeological park, Tim has worked closely with the Tennessee Great War Centennial Commission.

“Things we have learned and the opportunities to just give honor and respect to the Tennesseans that served during that time are just immense,” he said.

The war also changed the lives of women, many getting involved in the Madison Co. Red Cross chapter.

“This was prior to women having the right to vote, and yet you see people stepping up saying they want to be involved want to be heard,” Inge Poole said.

As a result of the work done by the American Red Cross chapter in Madison County, the surgical dressing workers gave to the city a memorial fountain.

The fountain lists the names of the surgical dressing workers on one side, and names of the men from Madison County that died on the other.

“We have this history right here, this is on courthouse square in Jackson,” Carls said. “We need to learn this history and really bring it back to life.”

World War I was ranked as one of the deadliest wars in history.

The total number of military and civilian casualties were more than 38 million.