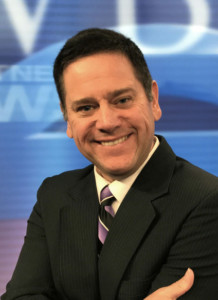 Brian Davis is originally from the southeastern U.S. where he grew up in one of the most active weather parts of the nation.

After graduating with an electronics communications degree, Brian went back to school and earned a bachelor’s degree from the University of Tennessee with a concentration in operational meteorology and geology. He also graduated from Mississippi State University with a bachelor’s in broadcast meteorology. While at MSU, Brian finished with advanced standing. Brian later continued through MSU’s graduate program in operational meteorology with advanced meteorology and geology courses.

Brian landed his first TV job in Alabama where he worked for over 10 years tracking severe storms and tornadoes. His past work includes WMTY-TV in Russellville Ala., WAAY-TV ABC 31 in Huntsville, Ala., and KOAM-TV CBS 7 and FOX 14 in the Pittsburg, Kan., and Joplin, Mo., market. He was at KOAM-TV where he assisted the weather team coverage of the EF5 tornado that occurred on May 22, 2011, one of the deadliest tornadoes in U.S. history. Brian also worked tracking mostly winter weather at WTRF-TV in West Virginia as a full-time morning meteorologist.

He was asked by Nick Walker, a board member of the National Weather Association and meteorologist for The Weather Channel, to speak at an NWA conference about his use of social media and new internet streaming technology that saved lives in Joplin and how it can be used effectively in addition to TV coverage.

Brian has been awarded the seals of approval from the American Meteorological Society and the National Weather Association after gaining high levels of experience and having his knowledge and skill tested by a national board of meteorologists.

His family is no stranger to broadcasting either. Brian’s cousin Don Spain was a longtime, respected host of a show that aired on PBS network affiliates throughout Tennessee. He was also the assistant news director in the ’80s at WSMV-TV.

In his spare time, Brian watches the weather, too. He also enjoys swimming, the beach and going on cruises.

Brian is thrilled to work with WBBJ-TV and call Jackson his new home.

You can reach Brian by email at badavis@wbbjtv.com.

Convicted Tennessee Senator to defend why she should remain in office