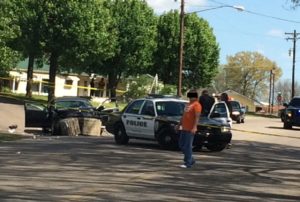 Officers responded around 2:45 p.m. to a report of a man with a gunshot wound in the 200 block of North Church Street.

Police say the man had crashed his vehicle and had a gunshot wound.

The incident is believed to have begun as an argument about a block away from where the victim crashed his car, according to police.

They say the shooter fired into the car, hitting the victim. The victim then attempted to drive away and crashed into a pillar.

There have been no arrests at this time. Police have not yet identified the victim or the suspect.