Temperatures will only cool down to the lower and middle 60s overnight with cloudy skies after midnight. Winds from the south at 5 to 10 miles per hour will make for a mild night in West Tennessee. Scattered showers and thunderstorms to our west in Arkansas and Missouri are moving east and may only bring a little rain to parts of northwest Tennessee, but severe weather is not likely tonight.

The cold front will move through West Tennessee between the late morning and early afternoon tomorrow, roughly from 11 a.m. to 3 p.m.. Scattered showers and thunderstorms will form along the boundary in the eastern half of West Tennessee where there is a marginal (1 out of 5) to slight (2 out of 5) risk for severe weather. 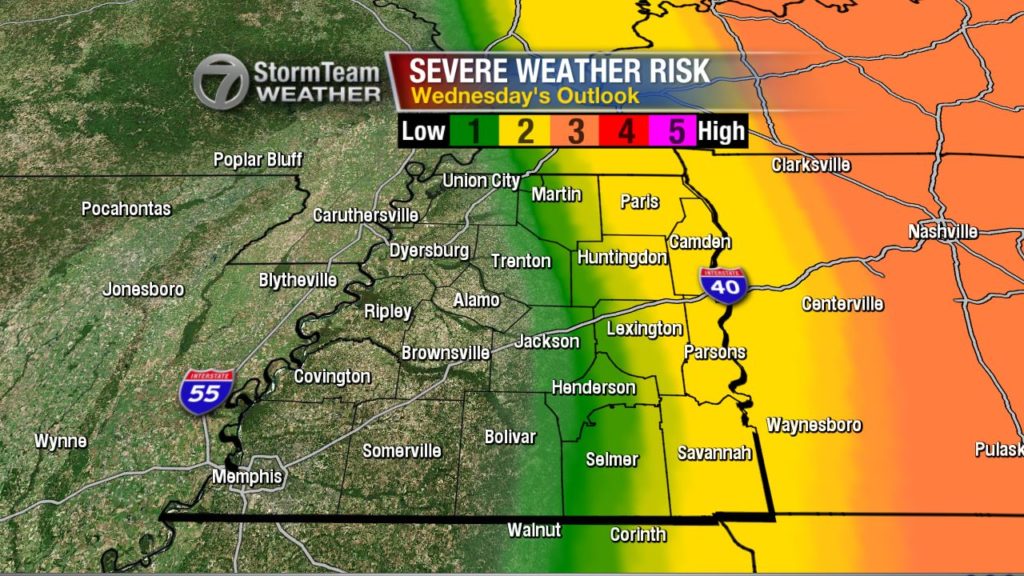 This is overall, a low probability for severe weather, but if any thunderstorms become strong or even severe there’s a potential for one or two thunderstorms to bring large hail and damaging winds. An isolated tornado cannot be ruled out, but again, the probability is low at this time.

Following the thunderstorms, conditions will be come windy tomorrow. Winds could gust between 30 and 40 miles per hour between Wednesday afternoon and Thursday morning. Following the windy conditions, a frost will be possible toward the end of the week – especially on Saturday morning. Stay tuned to WBBJ 7 Eyewitness News for the latest forecast and keep in touch with the VIPIR 7 Storm Team on-air and online for more updates!