Rallies planned on anniversary of MLK’s killing in Memphis

MEMPHIS, Tenn. (AP) — Activists claiming an imbalance in economic and social equality plan rallies across the United States on the 49th anniversary of the assassination of civil rights leader Martin Luther King Jr. 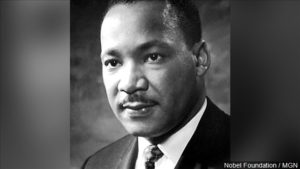 Black Lives Matter and the Fight for $15 movement have scheduled rallies in Memphis, Tennessee — where King was shot while standing on a hotel balcony on April 4, 1968. Rallies also are expected in Florida, California, Illinois and Michigan.

The Fight for $15 group wants a higher minimum wage for low-pay workers, including fast food employees and home and child care workers. The Black Lives Matter movement developed after the deaths of unarmed black men during confrontations with white police officers and has waged protests throughout the country.

King had come to Memphis to support a sanitation workers strike.