Tree planted in Jackson in tribute to Tennessee crime victims

JACKSON, Tenn. — Every April, across the nation victims’ families and advocates gather for National Crime Victims Rights Week. There was a special tribute Tuesday afternoon to victims right here in Jackson. 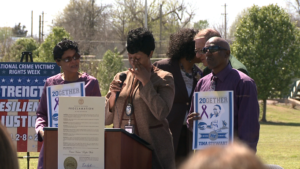 “I could not have foreseen my family surviving such a horrific incident,” Monika Jones said.

With her parents by her side, Jones told an emotional story of healing after her sister, Tina Stewart, an MTSU basketball player, was killed by her roommate in 2011.

With the planting of the tree, survivors, city and county leaders along with law enforcement took an opportunity to honor crime victims in Jackson.

“The board wants to take an opportunity every year to pay homage and tribute to the victims of crime, but not only to them but to those who lived past that victimization,” Tennessee Board of Parole member Barrett Rich said.”

Across the state this week, 10 trees will be planted by the Board of Parole, TBI, the Department of Correction and other advocates to honor crime victims.

Shannon Frazier, the wife of TBI Special Agent De’Greaun Frazier who was killed in Jackson last Summer, was in attendance for a special announcement. 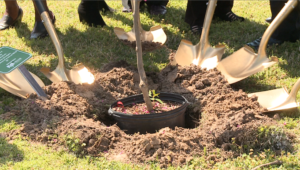 Families say the tree planting gives them time to reflect and helps with healing.

“I had to see through the tears, fight through the hurt and look around me,” Jones said. “There is always a rainbow after every storm. You just have to have the strength to find it. We are survivors.”

Nearly 90 trees have been planted across the state in the nine years these ceremonies have taken place.