JACKSON, Tenn. — Trash piles stacked high are starting to clutter many Jackson streets, which is a problem many homeowners said is getting worse by the day. 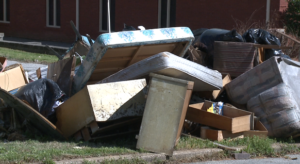 “That trash has been there three weeks”, said Darnisha Williams about a pile of trash in her neighborhood. “Trash shouldn’t be there that long.”

She said she has been calling the city about the problem for nearly a month.

“The city comes up and down this street, they just don’t do anything about it,” she said.

But one community activist said the city is not to blame.

“There are not enough trucks, and not enough people to pick it up, so that’s what it is,” local radio host Richard Donnell said.

Donnell is working with the city to spread awareness about the problem through his talk show.

He said even through there is a shortage of trucks, the problem mostly stems from people thinking it is okay to litter.

Donnell said littering is the start of the problem. But when does throwing a plastic bag on the ground, turn into a stacked-high pile?

“Trash, draws trash,” he said. “When they throw things out and people see an area that is highly littered, then if they have something to throw out, they will throw it in the same place.”

Donnell said the problem does not only affect people who live in Jackson.

“Visitors come to Jackson and they see all the litter, that turns them, off plus it turns the citizens off,” he said.

Donnell said everyone in the Hub City can help make a difference.

“Stop throwing cigarette butts, paper and everything else on the streets in Jackson,” he said. “Lets just stop doing it.”

Donnell also said when it comes to people leaving trash out on the curb, the city will not come and pick it up unless you give them a call.