JACKSON, Tenn. — Those who live and work near the law office where an employee was shot and killed Thursday morning say the event has left them scared, but they still consider their neighborhood a good one. 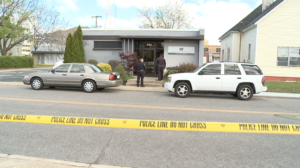 Jackson police shut down East Baltimore Street Thursday morning after responding to a 911 call around 8:40 a.m. about a woman being shot inside Casey, Simmons and Bryant law office.

Police would later identify the victim as Betsy Raines, 60, who worked at the office. She was taken by ambulance to a local hospital and pronounced dead at 11:50 a.m.

The woman police say pulled the trigger was later identified at Shurnue Bratton, 60, who they say had recently been terminated. She is in custody awaiting formal charges.

WBBJ 7 Eyewitness News talked with people who live and work in the area while the shooting was still under investigation.

“Holy cow. What’s wrong with people?” said Seth Chandler, who works and lives across the street. “It’s a law firm, so you just assume the worst.”

Neighbors we spoke with say they didn’t hear the shooting but saw the aftermath.

It’s kind of scary,” Jeff Roush said. “We poked our heads out and saw all the cops and the firemen and stuff.”

“It’s really scary, especially since I know the people in the office over there,” Linda Long said.

Long owns a building nearby and drove up on the scene. “The road’s blocked all the way from Highland to Royal, and I said ‘what is going on?'”

Despite the shooting, Chandler says he still feels safe in the neighborhood.

“This kind of thing is tragic,” he said. “You see it and you think, ‘hmm, man, what could you do to stop that?’ I don’t know if anybody could stop that when somebody’s so intent on doing something like that.”

This marks the second homicide of 2017 in the city of Jackson.