JACKSON, Tenn. — It was an exciting evening, Thursday for the Jackson-Madison County School System, as members met, not to conduct business, but to welcome its newest leader to the school board. 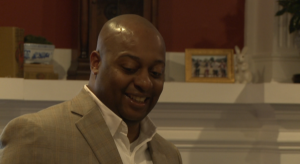 The school board celebrated the guest of honor by hosting a dinner and meet and greet, Thursday evening.

Jones was voted into the superintendent position less than three weeks ago, but said he already has a few goals in mind for the next school year.

But until then, he plans to find out what the community wants before any major changes are made.

“More than anything,  I want to listen and do a lot of listening over the next few weeks and months,” Jones said. “So we can really make sure we are making an informed decision about what’s best for our school system.”

The meeting was held at the home of school board chariman, Bob Alvey.

Alvey said the goal was to get to know Jones in a more informal setting than a typical school board meeting.

“I think it’s fun to kind of get away from the board setting, and do something a little more social,” he said.

Alvey said the board members are not the only ones happy with their decision, but the community, too.

“Everywhere I go in public, I have people stop me and say how impressed they are with Eric and they are excited he is here.”

As for Jones, he said he is mostly excited about taking over the role and getting started.

“I’m really excited about the work and looking forward to diving in and making our school system the best in the state,” he said.

Jones said the board is still negotiating a start time for him, but he hopes to take over sooner, rather than later.

Jones was approved last month after he received a majority of votes by board members to become the new superintendent of schools.