JACKSON, Tenn. — Saturday afternoon we got our first taste of college football thanks to the Lane College Dragons. 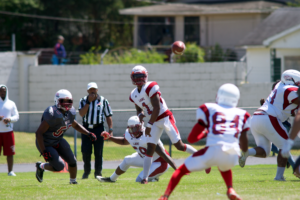 The only college football team in town had their annual spring football game at Lane Field Saturday. A trick play was the first play off the scrimmage, and it was taken all the way to the house for a score. Head Coach Derrick Burroughs says all players on offense and defense got a chance to show how much they’ve improved this off season.

“Upper classmen aren’t in the spring game, but I’m looking forward to watching the maturation of our quarterback,” Lane Head Football Coach Derrick Burroughs said. “He’s been a two year starter for us. I’m looking forward to giving some guys a chance to show that they are ready to be starters. And a lot of times we evaluate a lot of our young kids to see if they’re actually ready to play for us.”

Burroughs says he’s ready to take his team to the next level and have a winning season. Lane College’s first home game is September 23rd against Clark-Atlanta University.