Lane College has new feature to welcome visitors on campus 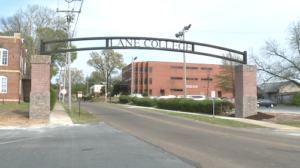 “Like they have the “Arc De Triomph” in Paris, this is the “Arch De Excellence” in Jackson,” said senior advisor to the president Richard Donnell.

Lane College competed in the 2016 “Retool Your School” competition vying to take home the big bucks.

“The competition was among 64 Historically Black Colleges and Universities and we won in the category in which we were located and we won a $50,000 grant,” Donnell said.

Lane won with more than a million votes. Construction began in January and now the ‘piece de resistance’ is complete.

“We’ve gotten positive comments from alumni as well as people throughout the community and it’s just a good nice thing to have on campus. It’s a nice addition to the campus,”  Donnell said.

Student Government President Bryalin Laster said it was not easy beating out the other top schools.

“Work. We had to get on Twitter, Instagram. We were all over the place using hashtags. It speaks to the environment that we have. We are a small campus, small college so everybody sticks together and work together in everything we do,” Laster said.

Whether you walk or ride, Lane College wants to make sure you feel welcomed when you go on their campus.

“When they enter this, they enter it with pride knowing that they are on hollowed grounds where they can come successful in life,” Donnell said.

“The future is bright for Lane College. We have a lot of things in store and a lot of things the college is working on so this is just the first step in making the campus where it will be in the next 5 to 10 years to come,” Laster said.

Donnell said the school is looking at having an official dedication during commencement weekend.