JACKSON, Tenn. — A new training tool teaches local law enforcement how to handle real-life situations. The virtual training equipment includes everything from active shooter to domestic calls. They are fake scenarios that feel like real life. 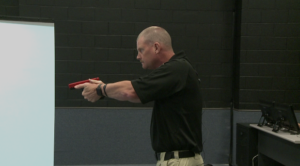 Lt. Chip Holland with the Madison County Sheriff’s Office took down a fake gunman Monday during a training exercise. “It is almost as real as you want it to be,” he said.

The technology is called the MILO Range system. The video game-like training tool gives deputies a 180-degree view of a call that could happen in real life. They respond accordingly.

“If somebody pulls a gun on them or a knife or whatever, it’s a split second,” Madison County Sheriff John Mehr said.

Mehr said his office, Jackson police and Metro Narcotics recently purchased the technology together for about $80,000. “The more we can help train our officers, the better off everybody is,” Mehr said.

Deputies use a training weapon during the exercise similar to a department-issued firearm.

The instructor can manipulate the scenario. A camera records the whole thing. Afterward, they can go back and talk through any mistakes. “I can tell you to do something and tell you the reason why, but until you actually experience it, we can drive home points with this,” Holland said.

Mehr said all Madison County deputies will go through the training.

The MILO Range system is located at the former West Middle School. Mehr said they plan to move the sheriff’s office into that building this summer.