JACKSON, Tenn. — First responders were on scene Monday at a local high school. While the emergency wasn’t a real one, they hope the lesson is one that lasts. 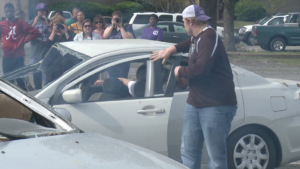 Brownsville police, ambulance services, the fire department and a local funeral home were on hand as Haywood High School seniors witnessed a mock crash in their own school parking lot.

Students from the school took part in the demonstration. Some said it was an emotional experience.

Dave Brown, a former meteorologist from Memphis, spoke to students about the dangers of drinking and driving.

Brown lost his granddaughter and daughter, who was a pregnant at the time, when a drunk driver hit them.