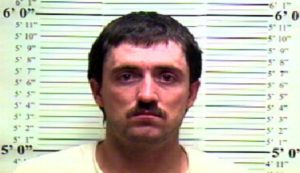 Darrin Walton, 39, was spotted by deputies Monday afternoon in a green Jeep Cherokee in the Austin Springs area, according to a release from the Weakley County Sheriff’s Office.

Walton led deputies on a high-speed chase along several back roads before driving into a field, getting stuck and abandoning the Jeep on foot.

The vehicle was found to be stolen from Montgomery County.

Just before 4 a.m. Tuesday, a truck was reported stolen from a home near Palmersville.

Deputies located the vehicle on Webb Road and after a short chase the driver pulled into a field and abandoned the vehicle.

A Tennessee Highway Patrol helicopter helped search the wooded area north of Palmersville, but deputies were unable to locate the driver.

Items found in the truck are believed to be stolen by the driver from another unknown location.

Walton is wanted in connection with multiple break-ins in the northeastern part of the county, according to the sheriff’s office.

He is currently charged with multiple counts of theft, including one count over $25,000.

Anyone who sees Walton or knows where he can be found is urged to call the Weakley County Sheriff’s Office at 731-364-5454.