MARTIN, Tenn. — Two schools in Weakley County closed their doors Thursday morning after an ammonia leak at a local co-op. 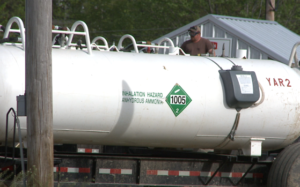 Students from Martin Primary and Elementary schools were sent home and picked up before classes started Thursday morning.

“We all got here early this morning,” Director of Schools Randy Frazier said. “The fire department was here with fans and various things trying to get just the fumes out of the building. We just weren’t comfortable with what we found, so about 6:35 we made a call to notify parents that we would not be in school.”

The Martin Fire Department says they responded to calls reporting a strange odor in the area around 7:30.

“Weakley Farmer’s Co-op was filling farm tanks and they had a safety valve that malfunctioned on one of their hoses, which was allowing the product to go into the atmosphere,” Fire Chief Jamie Summers said.

Officials say that when ammonia hits the air, it expands up to 850 times its size. When the gas hit the air Wednesday night, it traveled up to three square miles in Martin, including a school zone.

“Our initial estimates were about 30 pounds of liquid, which resulted in about 640 cubic feet of vapor was released from one of the tanks. It covered several city streets downtown,” Weakley County EMA Director Jamison Peevyhouse said.

Officials said they received more than 100 calls reporting the leak, but with quick action no one was hurt.

“By about 10:30 last night, most of it had cleared from the town,” Peevyhouse said. “There was still a lingering smell. We had no EMS calls because of it. We had a lot of folks reporting just difficulty breathing because of the stringent smell.”

Frazier said schools are out for Good Friday, which will give the buildings time to air out so they will be ready for classes Monday.