NASHVILLE — The Tennessee Bureau of Investigation on Thursday released its 2016 Crime in Tennessee report. 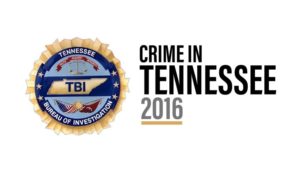 The annual study revealed a slight increase in reported instances of crime in the most recent reporting year, according to a TBI release.

The study compiles data reported from each law enforcement agency in the state through the Tennessee Incident Based Reporting System, or TIBRS.

Findings in the latest reports include an 11.6 percent increase the reported murders from 2015 to 2016. Forcible rape offenses decreased 2.8 percent in the same period.

More than half, 51.3 percent, of all reported offenses in the category of “Crimes Against Persons” were domestic violence-related, the release states.

“We’re extremely thankful for our dedicated law enforcement partners,” TBI Director Mark Gwyn said in the release. “Together, they helped us compile a thorough snapshot of crime in Tennessee. We now hope every department takes this information and works to further address the key crime issues facing their communities and our state.”