JACKSON, Tenn. — A mysterious fish kill in one community lake is raising questions and leaving many residents concerned. 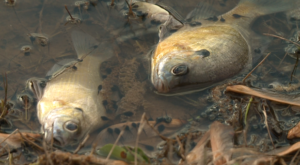 Hundreds of dead fish swamped the shores of one neighborhood lake, a stench that could be smelled blocks away.

“They were all dying. There was just hundreds of them lying around,” said Linda Watts, who lives by the lake.

But the smell is just one cause of concern.

Watts has lived in the Seven Oaks neighborhood next to the lake for nearly 10 years and said this is a problem she has never had to deal with.

“If there is something in the water, is it going to get into our drinking water? We don’t know,” she said.

The water is filled with dead fish of all sizes including catfish, carp and trout.

The mysterious kill brought out many people in the neighborhood who say they are demanding answers.

Watts says the problem doesn’t only raise concerns for them but other wildlife as well.

“We have so much here, so much wildlife. It scares me,” she said.

But after numerous calls to the Tennessee Wildlife Resources Agency and 911 office, residents were told the problem was a lake turnover. There was no word on when they will be cleaned up.

Watts said when a lake turns over, it brings debris to the top. But the waters in the lake are clear, leaving him and other residents searching for the real reason.

Due to the holiday weekend, we were unable to reach anyone with TWRA on the issue.