JACKSON, Tenn. — A historic monument to fallen Confederate soldiers in downtown Jackson was vandalized overnight, and police are asking the public to help in their investigation. 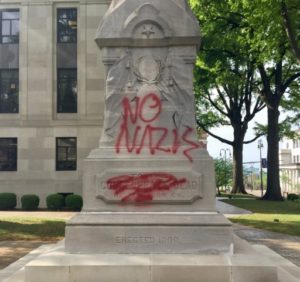 The words “No Nazis” were spray painted in red across the stone monument located outside the Madison County Courthouse.

The nearly 130-year-old monument is inscribed with the words “To the Confederate Dead of Madison Co.” and “Erected 1888.”

Police say they are not considering this a hate crime at this time.