Man charged in death of 5-month-old appears in court

TRENTON, Tenn. — A man charged with murder in the death of a 5-month-old appears in front of a packed Gibson County courtroom. 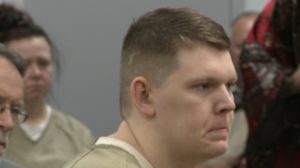 Court was packed Tuesday with the victim’s family and family of the accused, Braxton Edwards.

The 21-year-old faces charges of first-degree murder, aggravated child abuse and neglect of 5-month-old Maxyn Killingsworth, who died in July 2016 from spinal injuries.

“Extremely serious case, about as serious as a case can be,” Gibson County General Sessions Court Judge Mark Agee said. “It’s just a horrible situation. I know that there are a lot of emotions, but this is a courtroom, so we will maintain order and decorum.”

In the preliminary hearing, a Gibson County sheriff’s investigator testified Edwards said he tripped over a dog while holding the baby, falling on top of him. Moments later, the child began to seize.

She also says Edwards admitted to shaking the baby before calling 911. 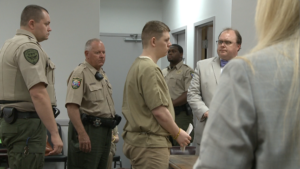 The doctor who treated Killingsworth at Le Bonheur Children’s Hospital in Memphis said the child didn’t have external injuries consistent with the simple fall. He said the internal brain injuries, fractured spine and retinal hemorrhaging were suspicious. In her opinion, the injuries were inflicted trauma.

The judge bound the case over to the Gibson County grand jury.

Edwards remains in custody. His case will be heard July 5 by the grand jury.