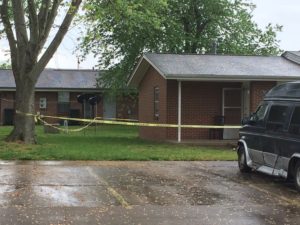 Martin police say they received a call around 9 a.m. Tuesday of an unresponsive man at 70 Lester Lane.

“I walked out the door and I said, ‘Oh, it’s Charles!” neighbor Kimberly Bills said.

Charles Graves, 51, was pronounced dead at the scene, but officials are not saying exactly how he died.

Gary Jackson lived next door to Graves and said he woke up to a scene he has never seen before.

“I went out the back door this morning and I saw the yellow tape. I came around the corner and the officer wouldn’t say anything. Finally, I asked a direct question and asked if this was a criminal investigation and he said ‘yes’,” Gary Jackson said.

Police have launched a homicide investigation but have not said if a suspected killer is on the loose.

“His auntie used to come over here every day and even on the weekends,” Bills said.

Neighbors said Graves was paralyzed and confined to a wheelchair.

Friends are remembering a kind man they call an asset to the community.

“He was up and happy-go-lucky,” Bills said.

A family member said they believe something suspicious happened and are urging anyone with information to come forward.