PARIS, Tenn. — The oldest working courthouse in West Tennessee is getting spruced up before the “World’s Biggest Fish Fry.” 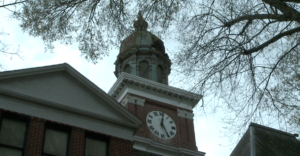 The Henry County Courthouse dome was damaged during a storm a few weeks ago, and the county started prep work Wednesday to reconstruct the dome.

Officials say a small section was ripped off during straight-line winds.

“Paris, Henry County is always really excited about the World’s Biggest Fish Fry, and certainly we want our community looking spic and span for it, and hopefully the courthouse will be repaired in time for thousands of visitors to descend on Paris,” County Historian David Webb said.

Officials say they plan to start setting up scaffolding and begin work Thursday.

Webb says this is the first time the courthouse dome has been damaged.