JACKSON, Tenn. — Police ask for public input to help identify a man they say stole over $200 worth of fishing gear from Wal-Mart. 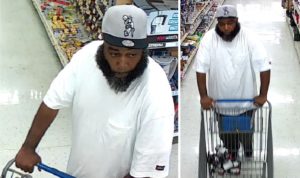 The unidentified man was captured on surveillance video April 11 leaving Wal-Mart in north Jackson without paying for five fishing reels, according to a release from the Jackson Police Department.

The total value of the stolen items is about $230, according to the release.

Police describe the man as a black male with a heavy build and a beard. He was wearing a white t-shirt, dark pants and a ball cap with a logo.

You can also leave a tip online at jmcrimestoppers.org or by texting CRIMES (274637) with the keyword “tips 911” along with your tip.