UPDATE — A tip led authorities to Elizabeth Thomas and Tad Cummins at a cabin in rural northern California, according to the Tennessee Bureau of Investigation. See the updated story here.

NASHVILLE — Amber Alert subjects Tad Cummins and Elizabeth Thomas have been found in northern California, according to the Tennessee Bureau of Investigation. 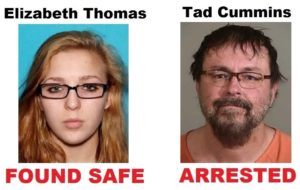 Thomas, 15, has been safely recovered and Cummins is under arrest.

The TBI said it would provide more details in a press conference later.

Elizabeth Thomas disappeared from her home near Columbia on March 13. Columbia is about 45 miles south of Nashville.

Court papers filed recently in the girl’s disappearance say she was afraid of the teacher and thought she would face repercussions at school if she resisted him.

The Associated Press contributed to this report.

Educator of the Week: Tina Rich