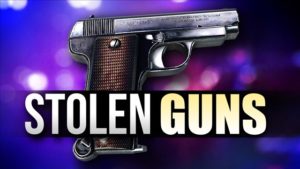 The two residents told police the door of their home on High Street had been kicked in sometime that day, according to a report from the Union City Police Department.

They told police they had not gone into the home because they had guns inside. An officer entered the home and made sure it was clear and saw that the gun cabinet was empty.

A total of five guns were reported stolen from the home, including a Remington .30-06, a Remington 20-gauge shotgun, a Ruger .22 rifle, a lever-action 16 gauge and a Smith & Wesson 9 mm.

Police were able to photograph a shoe print on the door. They say the gun cabinet was locked and appeared to have been forced open.

They told police nothing else at the home appeared to be missing or out of place.