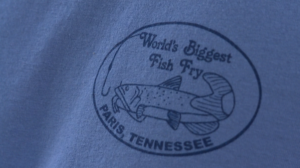 PARIS, Tenn.– A town with big fish to fry.

Monday kicked off a week-long festival in Henry County bringing people from all over the country to West Tennessee.

“Way back in the day it was called “Mule Days”. Everybody would bring their mules to town and trade. Then tractors came along and they needed something else,” Taylor said.

That is when the grease hit the pan and the fish fry began.

Taylor also says it triples the population for the city of Paris.

“I just met a guy who came down from Missouri and if you ask me, that’s pretty crazy. He just saw the paper and decided to come down,” Jasmine Jones said.

Jones is the Hostess Princess of the festival and said no matter how big or small all can enjoy.

“There’s everything for somebody. There’s the carnival, funnel cake, hot dogs and the rodeo,” Jones listed.

There are events especially for the little ones.

“There are so many kids. If you have a big family then they will enjoy because there are definitely a lot of kid for them to play with.”  Jones said.

It is an event that unifies the community.

“Without the community involvement our event could not be what it is today,” Taylor said.

“I definitely think the fish fry helps all of the community come out and socialize and get to know one another,” Jones said.

Organizers say rain or shine the festival events will go on.