BOLIVAR, Tenn. — Early voters in Bolivar can head to the polls beginning Wednesday morning to cast their ballot for the city’s elected officials. 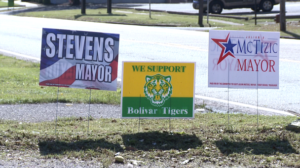 Voters will choose between two candidates to lead the city. The first is incumbent Mayor Barrett Stevens, who’s held the position for the past eight years and says his work is far from over.

“We have two very large unfinished projects, and they have to do with tourism and recreation,” Stevens said.

Mayor Stevens said if elected for another term he wants to see the nature park and river park projects come to fruition.

This time around there’s a new challenger, Julian McTizic, who’s currently a city councilman. McTizic says one of his main goals is to stay transparent.

“It’s not the responsibility of the citizens to come to us, but we should go to them to let them know what’s going on and give them that opportunity to have a voice in the matter,” McTizic said.

Although the mayor wants to see the park projects completed, McTizic said certain steps should be taken before moving forward.

“I’m not against building our economy — of course I am all for that — but it’s always a process and a procedure that you have to take to make sure that we’re being up front with our constituents,” McTizic said.

With early voting on the horizon, voters may be wondering about the candidates’ experience.

“If there’s anything to be valued about experience, it’s not that you’re involved in stuff. It’s more or less what you learn from what you’ve done,” Mayor Stevens said.

“I want to come and bring some fresh ideas, some new energy to the city, something that we haven’t had in a long time,” McTizic said.

Early voting begins at 8 a.m. Wednesday. Election Day is May 16.