JACKSON, Tenn. — Four months after a Pre-K learning program was forced out of its original building, a final decision is made on where it will be located permanently. 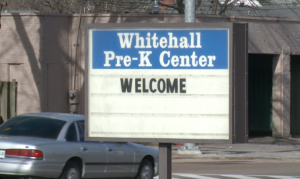 “Basically what the board did was authorize the opportunity to have the Pre-K program remain at Nova but try to expand some additional class opportunities within the Whitehall area,” Jackson-Madison County School Board Chair Bob Alvey said.

Whitehall was damaged in a hail storm in January forcing a move to the former Nova Elementary School building. It was a move many parents and staff applauded.

The school board voted 5-1, with three members abstaining, for the program to remain at Nova. It is a decision that did not come without a fight. In a tense meeting, members of the east Jackson neighborhood surrounding Whitehall clashed with those supporting the move to Nova.

“We don’t want to keep closing down schools in underrepresented communities because it sends a bad message to our students,” Lane College student Malina Gray said.

“The community has gotten the short end of the stick. Particularly in the African American community and the inner city,” NAACP President Harrell Carter said.

Others praise the board’s decision.

There was another discovery in Tuesday’s meeting.

“Thelma Barker is the most overcrowded school,” Alvey said.

This is a drastic change from what Superintendent Verna Ruffin has said all year.

“That’s been an issue we have dealt with and talked to the superintendent about, and she has continued to share to the board that we don’t have overcrowding. I believe as board members we believe there is overcrowding when we visit schools,” Alvey said.

The school board officially approved the contract for incoming Superintendent Dr. Eric Jones.

The board also approved a $700-a-month transportation allowance for Jones. This is the same as for current superintendent, Verna Ruffin.