NASHVILLE — The Tennessee attorney general has filed a lawsuit against a “predatory” Texas law firm on accusations of illegally soliciting business from families of Chattanooga bus crash victims. 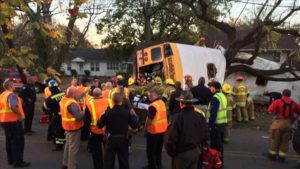 The lawsuit alleges the Witherspoon Law Group, attorney Nuru Witherspoon, and investigators Alphonso McClendon and Glen Smith illegally contacted families of victims in the Nov. 21 bus crash, according to a release from the office of Attorney General Herbert H. Slatery III.

It is against Tennessee state law for attorneys to solicit business within 30 days of a tragedy, according to the release.

After the bus crash involving Woodmore Elementary School students, the Attorney General’s Office received reports that Witherspoon, through its investigators, made contact with victims’ families as they made funeral arrangements at a local funeral home.

The suit, filed in Hamilton County Chancery Court, alleges the firm’s investigators presented themselves as attorneys and pressured families to sign contracts and other documents, according to the release.

The investigators also reportedly offered to pay funeral costs in exchange for using their services. At least one family was told the funeral home would refuse to bury their child unless they signed a contract with Witherspoon, the release states.

“Following the tragedy, our office committed to shutting down any attempt to take advantage of the families in Chattanooga,” General Slatery said in the release. “This lawsuit reflects our ongoing effort.”

Anyone with information about these individuals or any other law firm or individuals soliciting clients immediately following the Woodmore Elementary bus crash should contact the Attorney General’s Office Consumer Protection and Advocate Division at 615-741-1671.