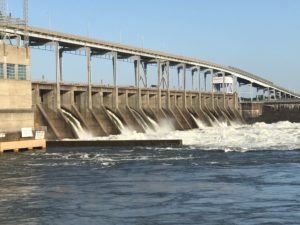 “I would not advise anyone to put a boat in there at all. It is very, very dangerous,” one man said.

Two bodies were recovered Wednesday below Pickwick Dam after officials say they and their boat were swept over the concrete edge.

The men have now been identified as Casey Cox, 32, and Michael Terry, 69, both from Chester County.

Hardin County fire officials said security cameras captured the moment when an aluminum flat-bottom boat with two men on board went over the edge.

Officials said the strong currents carried the bodies several miles down the river.

“We saw the Air Evac probably around 1 p.m., and it did go upriver from the dam,” one witness said.

Investigators spent hours combing both sides of the dam hoping more evidence in this tragedy will wash ashore.

“Getting their boat removed and going to take it to a place where we can do some more investigation with boat investigators that might be able to identify exactly what happened,” Markham said.

People said this is not the first time an incident like this has happened.

One woman said she remembers when a pontoon boat was swept over the dam with two people on board.