JACKSON, Tenn. — It is not a thief in the night, but one during the day. 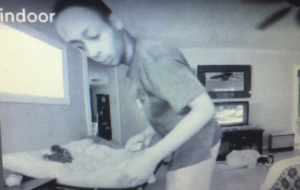 Investigators say a home surveillance camera captured the moments a man broke into a Jackson home on April 21.

“You can see all the pictures very clearly of a young man in there going through her belongings and stuff like this,” Lt. Johnson said.

In the video, a dog runs for help, and officers said this is not the first time the home has been targeted.

“They had a burglary one time, but then they went out and got a video monitoring system,” Lt. Johnson said. “The next time the person broke in, they pushed the air conditioner out the window and climbed through the window, but when they climbed in the window, it set off her monitoring system.”

Lt. Johnson said it might be the same guy from the first break-in, but it is too early to tell.

In the first home invasion, the suspect got away with several items. This time, he just went through belongings.

“Video monitoring systems are just as good as an alarm system because it doesn’t set them off or run them off, and she has it where it’s set to go to your phone,” Lt. Johnson said.

It is one homeowner’s tool the suspect could not steal.

“She might have just outfoxed the fox and caught him,” Lt. Johnson said. “Hopefully, we’ll catch him this way.”

Out of years of going through surveillance footage, Lt. Johnson said this video takes the prize.

With this evidence, investigators are sure they will find the suspect.

“I feel confident once this airs and you air it, as soon as people see this picture someone is going to want a cash reward — and they are going to get it,” Lt. Johnson said.

Crime Stoppers is offering a reward of up to $1,000 with information leading to the arrest of the suspect.