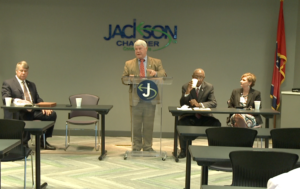 State Sen. Ed Jackson along with Reps. Johnny Shaw and Jimmy Eldridge met with local citizens at the Jackson Chamber. They periodically update West Tennesseans on what’s happening in the state legislature.

One hot topic was the recently passed IMPROVE Act. It raises the gas tax for road projects but cuts taxes in other areas.

“I fully supported it from day one,” Rep. Eldridge said. “I think it’s the right thing to do for our state to improve our roads, important for infrastructure.”

“The roads projects we’re going to get across our state, the municipalities are going to get some money, help local roads. I think it’s a good idea,” Rep. Shaw said.

“I think it’s probably going to be a good thing for our state in the long run,” Sen. Jackson said.

State lawmakers say they plan to take up the budget next week.