COVINGTON, Tenn. — The powerful storms downed power lines and trees,  leaving many without power in Covington. 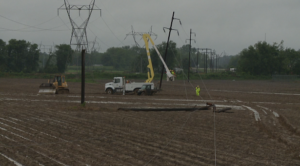 Emergency crews worked to clean up the damage left by a round of severe storms Sunday morning.

“Repair could take up to 24 hours,” City Chief of Police Buddy Lewis said. “So we could have a rather lengthy time here, not having a lot of power in our city.”

EMA directors said the storms rolled in just before 9:00 a.m.

They say it started as a severe thunderstorm warning, quickly turning into a tornado warning.

“Sometimes it just comes very quickly, and we are not able to get the word out as quickly as we would like to,” county EMA director Tommy Dunavant said.

Many are left with damage to their homes and without power.

Some people in the area said believe it was a tornado that caused the damage.

“They say it’s wind, but I think its a tornado,” Keith Whitehorne said.  “Just because of the way it bumped the poles in half, and twisted the trees.”

Chief Lewis said the the National Weather Service will asses the damage and have final say on the type of storm.

“It was a lot of heavy rain, and a lot of wind came through,” he said. “We really think it was straight-line winds that did this damage.”

City mayor Justin Hanson said the damage might be inconvenient, but it could have been worse as no injuries were reported.

“Through technology like weather aps and the internet, residents here in Covington and across West Tennessee are able to stay alert a lot quicker than normal,” he said. “That’s the beauty of that.”

Electric crews say they should have power fully restored within 24 hours.