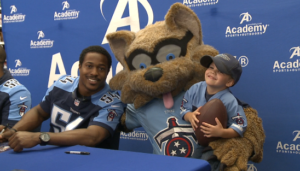 JACKSON, Tenn — The Tennessee Titans headed to Jackson Sunday as part of their Titans Caravan Tour.

A sea of blue and white took over Academy Sports and Outdoors as eager fans waited to meet some of their favorite players.

Another fan, Barbara Moore said “Oh I’m excited especially for Avery Williamson he’s from Milan so we’re real excited about seeing him today and getting his autograph.”

“Coming home is probably the best part and just being able to see friends and family that I know.” Williamson said.

Fans showed up empty handed because the Titans provided free autographed posters, and they encouraged fans to take lots of pictures. Linebacker Aaron Wallace said it’s important to have personal interactions with fans.

“Their the ones that support us their the ones that cheer us on on Sunday’s.” Wallace said. “People are passionate about football and what we do so seeing the fans gives us a little bit more motivation to work.”

The stop to west Tennessee has fans ready for next season. “We’re looking forward to winning this year.” Moore said.

Williamson said this year the team is looking forward to the playoffs. “I feel like we missed out on that last year.” Williamson explained. “We were just one game short so I feel like that’s the expectations and once we get to the playoffs we’ll go from there.”

The caravan will make 20 stops throughout Tennessee, Kentucky, and Alabama. Monday the caravan will visit with soldiers and family members of the 101st airborne division of the us army at Fort Campbell, KY.