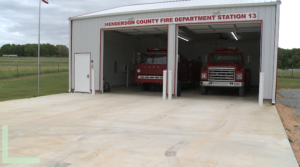 “We still got some more equipment to get and set everything up just right, but it won’t be much longer, and everything will be set real good, and we’ll be in pretty good shape I think,” Henderson County resident Johnny Duke said.

Capt. Steven Camper says each of the new buildings solves one of their biggest problems.

“In rural areas, there’s not many fire hydrants, there’s not much water supply, so we have to carry our own water to the fire,” Capt. Camper said. “So a lot of times we have to have other stations respond as well just to bring more water.”

Chief Lynn Murphy says these additions will also save property owners in the long run by lowering what they pay for insurance.

“In rural fire protection, they recommend that all properties be within five road miles of a fire station,” Chief Murphy said. 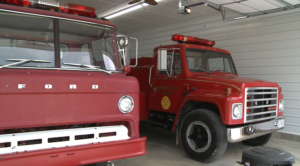 Station 13 is just one of six stations that have opened this year, and Capt. Camper says improving their response time can mean a matter of life or death.

“I’ve been faced with that situation before, where you have to go in and you might have to help somebody out, and you know, two or three minutes can make a big difference versus seven or eight minutes,” Camper said.

The new stations are considered substations to the county’s 11 larger stations. Chief Murphy also said the Henderson County Fire Department is recruiting volunteers for all stations throughout the county.