JACKSON, Tenn. — Bill Akin has completed 15 marathons, but he said crossing the finish line at the Andrew Jackson Marathon in March was hands-down his most memorable. 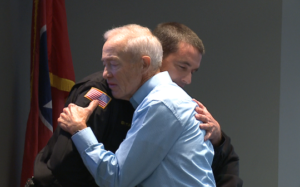 “I crossed the finish line, and they put the medal around my neck,” he said. “They said I walked about five or 10 feet and collapsed right in front of the tent.”

Akin went into cardiac arrest, but emergency crews were just steps away.

Akin met the dozen or so men and women who literally brought him back to life for the first time face-to-face.

Madison County Fire Chief Eric Turner was among them.

“It’s all about timing sometimes, and being in the right place at the right time,” he said. “Having those people in place with the right type of training is important.”

“It puts life in a different perspective when you go through this,” he said. “When you have actually died, and they brought you back. It was just beautiful.”

Race directors also announced the marathon raised $61,000 for the Exchange Club-Carl Perkins Center for the Prevention of Child Abuse.