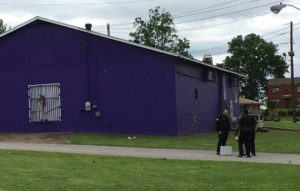 Police are looking for man in connection with the shooting that took place around 12:40 p.m. in the area of 33 Carver Avenue, according to a release from the Jackson Police Department.

A victim is being treated at a local hospital, according to the release.

Police describe the subject they are seeking as a black male who was wearing a red hoodie and blue jeans.

Investigators are working the scene and collecting evidence.