JACKSON, Tenn. — More than a century of history has been reduced to rubble, but the mess hasn’t moved in nearly three years. 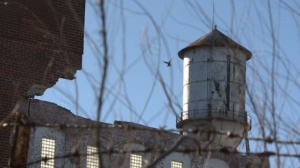 The city of Jackson has filed a lawsuit against the property owners of the Bemis Mill and will go to environmental court next week.

“Like when a tornado hits or a flood and there’s a disaster — and it is a disaster — the city has to step in and act,” city attorney Lewis Cobb said.

Cobb said a big part of the battle has been pinning the right company with the blame.

“The owners of the property entered into an agreement where the original owner would sell it to Bemis Mill LLC who would deconstruct it, remove the valuable items, the steel, the timber and some of the brick, and then return it to the owners,” Cobb said.

The process has never been completed.

Cobb said Bemis Mill LLC apparently hired businessman Christian Morton to clear the property and profit from the steel, bricks and lumber. They can’t track him down to serve him with papers.

“What the mayor has asked me to do is to go through the proper legal procedures to get authority to take over the property, to remediate the problem, and then seek, but from those who should have done it, reimbursement,” Cobb said.

If granted by a judge, the city will be able to go in and clean up the property, eventually building a park.

“The city has the funds to do that, but you have to get the site prepared before you can build,” Cobb said.

Until then, council members say they’re hurt by the condition of the area.

“It hurts to see it in the condition it’s in,” Foote said. “It hurt to see it go down. It hurts even more to see it unfinished.”

Cobb said after they go to environmental court, they hope to quickly get to work on the cleanup.

The city doesn’t know how long the cleanup process will take.