JACKSON, Tenn. — After years of planning, the multi-million dollar project to redesign a busy intersection in downtown Jackson by adding a roundabout will soon get underway. 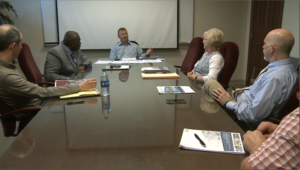 “Ready to see the outlook and see what a roundabout is going to be about,” District 2 City Councilman Johnny Dodd said.

“They will have to manage traffic up and down Highland during the project,” Jackson city engineer Scott Chandler said. “So it won’t be as easy as just shut the road down and build it. They’ll have to keep traffic moving through there.”

Federal and state funds will pay the estimated $2.6 million bill without using any local money. You can already see the markings where the improved intersection design will be, serving as a gateway to downtown.

“May have to beautify your community and bring a different structure,” Dodd said. “You go to other cities and you see roundabouts. Also be an opportunity to slow the traffic down.”

The city engineer says although a roundabout is different for the city of Jackson, it should help improve safety along this intersection that leads into downtown.

“By the time they’ve designed it to accommodate truck traffic, hopefully it won’t be where it’s too confusing,” Chandler said. “I think it will be designed such, it will be clear what we need to do.”

Construction is expected to begin sometime this summer and take between six months and a year to complete.

“It’s going to be kind of hectic for a while but good for Jackson,” Chandler said. “In time we’ll get it all put back together.”

According to the city engineer, the evaluation committee’s job is to make recommendations. Contractors and consultants will still need City Council approval.