BROWNSVILLE, Tenn. — Brownsville police are investigating a fatal motorcycle crash. Witnesses said it was a sight like they’ve never seen before. 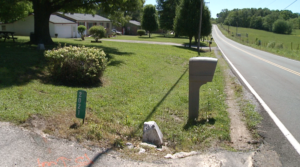 “He was in the air,” eyewitness James Callaway said.

Callaway said he was sitting outside his home Saturday night on Mercer Road when a motorcycle came crashing in his front yard.

Brownsville police said around 9 p.m. an officer noticed a dark-colored motorcycle without the proper tags. The officer flashed emergency lights and attempted to stop the driver on Mercer Road. Police said the driver of the motorcycle took one last look at the patrol car before speeding off at an extremely high speed, fleeing the traffic stop.

Investigators said the officer did not pursue the driver and instead notified the Tennessee Highway Patrol. The officer on scene continued down Mercer Road at a normal speed, where the officer found the motorcycle crashed a few miles down.

“I didn’t see the motorcycle until he jumped that hill. When he jumped the hill he was in the air,” Callaway said.

“Pretty much a tragic scene that happened,” Bradley Horges Jr., another witness, said. “A lot of folks that was sad and just wondering like what’s going on, why is this happening?”

Horges said a family member started to turn into the driveway when the motorcycle struck the vehicle and landed in the yard.

“It happened so quick. It was instant. In a second, heartbeat, and then he was gone,” Horges said.

Police say the injuries were so severe the 33-year-old man died at the scene.

Investigators say the high rate of speed was the cause of death. Police are not releasing the victim’s name as the incident is still under investigation.