JACKSON, Tenn. — A new bill allowing people to use silencers on their guns clears the Tennessee House and Senate. 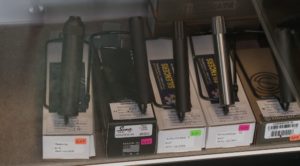 “It makes the gun almost twice as long as when it normally would be,” Smokin’ Guns owner Paul Burkhart said.
Burkhart owns a gun store in north Jackson. “Me as an individual, I don’t really see a use for them,” he said. “A lot of people do.”
The Tennessee House approved the bill Monday. The Senate approved it last month. It removes silencers from the list of weapons banned for having “no common lawful purpose.”
“I’m pro gun,” Daniel McPeake, of Henderson County, said. “It would give people a choice. I’m all about individuals’ rights and individual choices, so I’d have to say I’d be for it.”
Others give the legislation a thumbs down. “I watch the Jackson news and there’s enough stuff going on,” Russ Grigsby, of Medina, said. “I would hate to know that some of the people had silencers on their guns because then we wouldn’t hear some of the crimes until too late after the fact.”
Republican sponsors have said the bill, nicknamed the “Tennessee Hearing Protection Act,” is meant to protect the hearing of hunters.
Burkhart said purchasing a silencer takes time and money. He said customers must submit an application to the Bureau of Alcohol, Tobacco, Firearms and Explosives plus pay a $200 fee.
“About 10 months later they will return your application with a stamp on it saying that it’s approved,” Burkhart said. He said if that process was easier, he thinks silencer sales would skyrocket.
The bill now heads to Gov. Bill Haslam’s desk for approval.
Categories: Local News, News
Share this...