High school seniors give words of advice to elementary students

MAURY CITY, Tenn. — The Class of 2017 takes a walk down memory lane, having once studied in the same classrooms as the students cheering them on at Maury City Elementary School. 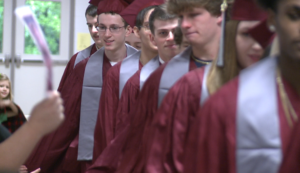 “We talk about graduation, but to see it happen in the caps and gowns is pretty awesome,” Principal Ashley Dodd said.

“It was really nostalgic, just looking back at some of my old teachers, and then all the kids I used to be, and then all the hallways, the lunchroom, everything about this whole school,” senior Neal Forsythe said.

“You wonder, am I ever going to grow up to be this big? So it’s really nice to see them cheer us on, you know,” senior Jasmin Hicks said.

Principal Dodd started this rally last year and says it’s a way to encourage her students to work hard.

“We talk about graduation from day one, so this puts it all together for them,” Dodd said. “They see kids that actually went to Maury City come and walk the halls and see that we can do this.”

But they hope their hard work will be an inspiration to these young wildcats.

“I told them to not ever tell them they can’t, because for me, I’m going to the U.S. Army,” Forsythe said. “A lot of people told me I shouldn’t do that, I couldn’t do that, and now I’m leaving in July.”

Crockett County seniors will graduate at 7 p.m. May 19 in the football stadium.