McNAIRY COUNTY, Tenn. — Students march around the track at McNairy Central High School, ready to compete in the Special Olympics. 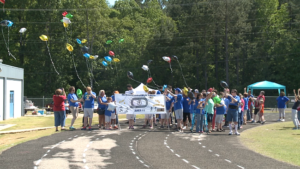 “The kids worked so hard for this,” organizer Kristen Hill said. “We wanted to make sure they got a chance to come out and do everything they’ve been practicing for so long.”

Hill has been coaching these students for months and said their competition was rained out the first time. They weren’t going to let these athletes’ hard work go to waste.

“They practiced the softball throw, whether it was outside of our classroom, if it was raining,” Hill said. “We practiced the long jump in the classroom. We just scooted all the desks back, and whatever we had to do, however we had to make it work. We came out and practiced on the track every single day.”

Parents and grandparents also came to support their students.

“He’s active at home, he loves hula hoop, he’s athletic, he loves competing, so he’s looking forward to this,” Gilbert Atkins said about his grandson Antavious.

It’s no doubt the teachers and coaches get as excited as their athletes.

“Some of these kids don’t get to get out and interact a whole lot with the general ed population, so with what I’ve seen, they thrive,” Hill said. “This is their day to shine. They come out here, they’re rock stars in my eyes.”

Volunteers came from the community and McNairy Central’s baseball team.