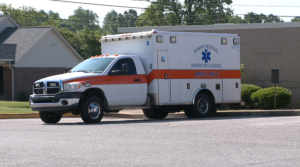 John Surrat says he’s used the service several times over the years, including when his arm was shot off by a shotgun in the 1960s. “I have gone to Jackson, the Med, and different places,” Surrat said.

The county’s contract with Community Health Services will end in 120 days.

McNairy County Mayor Ronnie Brooks said the services are ending in four months, and he plans on having a new contract with a different company by Sept. 1.

The mayor also said he’s established an Emergency Services Committee to be in charge of the bidding process for the companies.

The committee will also look at ways to provide health care alternatives not currently available in the county, such as mammograms and other health screenings.

Tennova Healthcare released the following statement: “We have had ongoing discussions with the McNairy County Commission as they plan for the future of ambulance services for the county and they have begun the process of identifying another provider. We will continue to support the community’s EMS needs until our Selmer EMS operations close on August 31.”

McNairy Regional Hospital closed in May 2016, and officials say they still don’t have an answer for the future of that building, but it is not owned by the county.