JACKSON, Tenn. — Commissioners and school officials disagree over how building projects should be funded in Madison County. 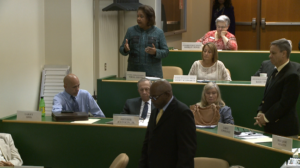 “It requires a lot of communication when you have that, and have we done that in the past? Probably not as well as we needed to, and I think the way we’re approaching this now is it’s going to be a lot healthier,” Stephenson said.

Commissioners first approved a $10 million loan to use mostly on school projects.

“What that allows us to do is to work on some of these priority-one and priority-two projects the schools have,” Stephenson said. “Also, it allows us, as we move forward with the jail, to be able to come up with some engineering fees and those kind of preliminary things for the jail.”

The school system was also given approval to move forward with an air conditioning unit at North Side High School. This project will cost more than half a million more than originally expected, bringing the total to $1.4 million.

“This was an agreement that was made very publicly between the school system and the county commission, as well as going through the various committees we have respectfully gone through,” Jackson-Madison County School System Superintendent Dr. Verna Ruffin said.

The additional funding will come from the loan.

The commission will vote on a final budget at the end of June.