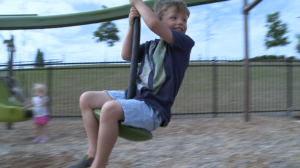 The park unveiled a play area for the young and the young at heart. Parents like Jessica Crosson said her kids were begging her to go see the new attraction. “Every time we drive by, every time we visit the park, they have been begging to come out here, so when I knew they were opening today, we wanted to be out here right away,” Crosson said.

“We’ve had a fantastic time putting this together,” Watkins said. “What better job could you have than to go out and look at playgrounds and design playgrounds? It’s something to make the kids happy.”

A giant chess board, life-size building blocks and a zip-line are just a few of the features.

The missile was donated to the park and has been restored to its original state.

For more information about the exhibits and park times, visit the Discovery Park of America website.