SELMER, Tenn. — A United States Air Force veteran has turned his love for his country into a World War II collection, and it can be seen Memorial Day weekend. 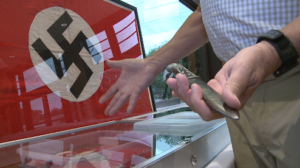 Darrell Beeson spent more than 20 years in the Air Force.

“I spent five years in Germany. I was all around this stuff. I spent four years in England at the Royal Air Force base there. I was in Sicily,” Beeson said.

That’s where he said World War II memorabilia was all around, and his collection began shortly after.

“I had a piece or two given to me, and then it just kind of snowballs,” Beeson said.

Beeson is setting up a display for the first time in years in downtown Selmer, and he said it’s bigger than ever.

The display is complete with a dagger from the Nazi party, comics from the 1940s, a medal of honor and even currency from the time period.

Beeson also has some local history on display, a quilt with names of soldiers from McNairy County, which he borrowed for the exhibit.

The veteran hopes his community will appreciate his efforts to keep this history alive.

“I’m going to be excited to look at it myself as a collection instead of just piece by piece,” Beeson said.

You can see the display at the Latta in downtown Selmer Thursday until Tuesday.