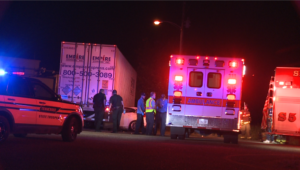 Tony Greene, 54, of Jackson was killed in the crash that occurred around 10:40 p.m. on Highway 45 in Three Way, according to a report from the Tennessee Highway Patrol.

Greene was driving a Ford Fusion southbound when his car struck the northbound truck’s trailer as the truck was turning across the southbound lanes, according to the report.

The driver of the truck was not injured.

Both men were wearing seat belts.