HUNTINGDON, Tenn. — Many of us are fortunate enough to not have to worry where our next meal is coming from. 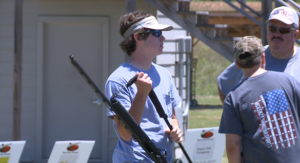 But for some in Tennessee, going hungry is a real problem.

Shooters gathered Thursday afternoon at Carroll County Shooting Sports Park to not only test their skills but to help combat the issue.

“I definitely want to make sure people are fed,” shooter Hunter Phillips said. “I don’t want to see anybody starving.”

The Shooting Hunger fundraiser brought out hundreds to the shooting range, with all money raised benefiting the Mid-South Food bank and the Second Harvest Food Bank.

Organizers say more than 260 shooters came from all over for this event, but the real goal is to make sure no one goes hungry.

“Most of us don’t have to worry about where our next meal is coming from, but there are those in Tennessee that perhaps don’t,” Tennessee Farm Bureau President Jeff Aiken said.

Aiken said this is the first year for the fundraiser in West Tennessee.

“We have been hosting these events in Middle Tennessee, so this is kind of expansion into the west area,” he said.

Carroll County Mayor Kenny McBride says the goal is to raise $50,000, which in turn would feed more than 400 people.

“I don’t think we will have a hard time surpassing that,” he said. “They’re telling us we have more shooters here today than were in Nashville in the fall.”

And as for people in the agriculture business, Aiken said fighting hunger brings them together. “We’re in the business of growing food, and we want to see that food goes to those who need it the most.”

The next Shooting Hunger fundraiser will be held Sept. 28 in Nashville.

Warm and Sunny for One More Day Before Rain Returns Friday